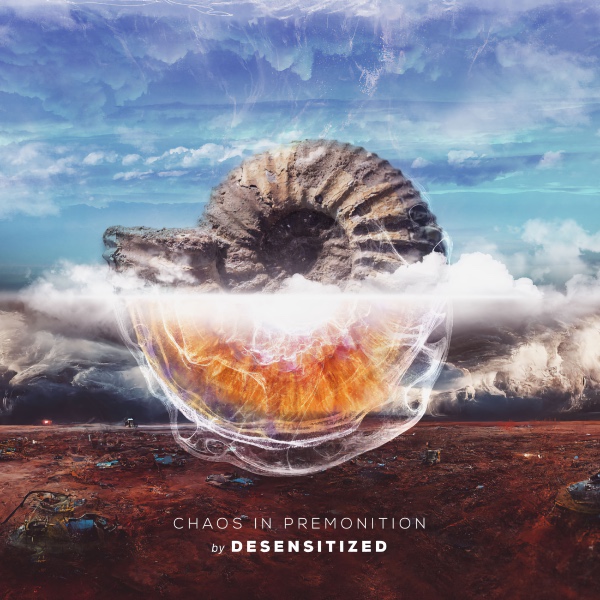 Inspired by the mysteries of the afterlife, Chaos In Premonition returns to the fantastical world Spotted Peccary artists Deborah Martin and Dean De Benedictis built in their first collaboration as Desensitized. Like their previous work Hemispherica Portalis (Portal of 1000 Years), Martin and De Benedictis recorded their latest release live in the studio together, forming nine pieces from edited improvisations. Blending instrumentation such as clay ocarinas, flutes and Tibetan bowls with a variety of digital and analog synthesizers, Chaos in Premonition is an album that invites contradictions and makes peace with them, the only way to approach the question that inspired it: who are we and what made us?

The title track “Chaos In Premonition” begins in quiet vastness and rises to a bewildering crescendo, then fades to an ethereal chorus. Percussive chimes like raindrops in a cavern rise slowly from shadowy depths, evoking the cosmic. From there, the piece builds a sonic mosaic of skittering breakbeats, glitched fragments and glimmering arpeggiations: the birth of a world from quietude. On “Abundant Time” counter-rhythmic clock samples and heartbeats ebb and flow around sinuous drones and gently plucked strings. The two artists employ a rich amalgamation of acoustic and electronic elements throughout the work. With “Immortals And Their Graves,” De Benedictis’ Mayahachi flute moves from calm lulls to sweeping trills to rhythmic stutterings and back again, capturing in its amorphousness the peaks and valleys of a life. Even vocal elements appear in the finale “Sleep Of Innocence” which finds Martin and De Benedictis humming in harmony over celestial chimes, an otherworldly lullaby. Just when one feeling takes hold, it darts away—unknowable, and yet a seamless compositional flow offers a well crafted consistency with every track.

Martin describes the joy of collaboration as discovery; as each artist brings their own unique identity, how their compositional styles will blend is a mystery until uncovered. She continues: “That is what I find most exciting, the endless potential and possibility.” De Benedictis says “the essence and originality of Desensitized lies in how Deborah and I are so different.” From asynchronous perspectives comes sonic synchronicity. On Chaos In Premonition, this accomplished duo embrace their collaborative name Desensitized and weave the ancient and futuristic into an otherworldly tapestry all their own.